Submission is Not Enough

I ABSOLUTELY LOVED this book! Theo and Erin's story is one I have been anticipating for quite some time and with the drama surrounding the two of them it was bound to be a fantastic story. Well, Lexi Blake delivers on all of the build up. I don't want to give the story away, but I do highly recommend it. It will make more sense if you've read a few of the books prior, but I think readers can get the gist of the story without doing so. This story gets a solid 5 stars from me and I can't wait for the next book in this series.

A fallen hero reborn Theo Taggart lost everything the night he died. His family, his beautiful Erin, and worst of all, he lost himself. A twisted doctor brought him back from the brink of death, but reprogrammed his identity to serve her will. Rescued by his brothers, he must fight to reclaim the man he was and the life, and love, that were stolen from him. A love worth fighting for Erin Argent thought she'd lost Theo forever. When he walked back into her life, it was nothing short of a miracle. Months of torture and conditioning at the hands of Dr. Hope McDonald have done damage to Theo that may never be mended. He has no memory of her or the life they shared. Breaking through to him, and helping him rediscover all he lost, will be the toughest mission she's ever faced. Luckily for Theo, Erin loves a good fight. Their reunion under siege Unfortunately, Hope is far from done with Theo Taggart. Obsessed with her prize experiment, she will do anything to get him back. If the only way to finally break him of his past life is to kill Erin and his son, then she's only too happy to oblige…

Theo took the stairs as quickly as he could. He knew where he was going, but he wasn’t going to think about it. For the first time since he’d gotten home, he didn’t care about his past or figuring out who he’d been. He wanted. He wanted something right now and that felt good. She’d been right. There wasn’t a place for guilt here. He strode up the stairs, her weight comforting in his arms. Yeah, he wasn’t going to think about that either. He was going to enjoy it, not wonder why his body remembered her when his mind would not. “Hey, is everything okay?” Damn it. Case was standing at the top of the stairs, obviously having come out of the privacy rooms. His wife was at his side, her face flushed. Mia had sex hair. Good for them. Red was about to have sex hair, too. Lots of filthy sex hair. “Everything’s great. Night.” Case put a hand on his shoulder. “Whoa. I thought you were going to take this slow, brother.” “If you don’t get your hand off him right this second, Taggart, I am going to ensure that you never have children,” Red said, her eyes narrowing on his brother. “You won’t be able to cock block anyone because you won’t have a damn cock. Am I clear?” Case’s hands came up immediately as though he knew that tone and was not going there. “Trying to help.” “Three is clean and has plenty of condoms. We’re taking a monitor turn up here. I checked all the rooms.” Mia grinned at him. She actually was helpful. “Have fun and we’ll see you at home.” He didn’t bother to look back. Case could give him a lecture later. He wasn’t waiting anymore. He’d waited forever. Even when he couldn’t remember her face, he’d known she was there. He’d felt her, or rather he’d felt her absence. Could he truly be with a woman whose name he couldn’t think without hurting her? It didn’t matter. He wasn’t making those decisions tonight. He was enjoying her. His sub. He was bringing her pleasure and he probably should do a good job of it because his sub was fucking mean. And fragile. He’d seen the moment she’d thought he was rejecting her. He’d watch her skin flush and her body start to turn in on itself. She was such a mix of strength and need. It was intoxicating. He wanted so badly to be the man who gave her what she needed. Affection. Pleasure. Comfort. Love—he wasn’t thinking that word tonight. Nope. Pleasure was way better. He kicked out lightly at the partially open door number three. It looked like Mia had done her job. The room was perfectly clean, the lighting soft and romantic. The best thing about this room though was the complete lack of any of his friends or family being here. It was him and her, and that was exactly what he wanted. No Ian. No Li. No Kai asking them hundreds of questions. Him and her and the night. He tossed her on the bed and stood back, looking down at her. “Tell me why you thought I was rejecting you.” The instant she hit the bed, she was up on her knees. So graceful. So deadly. What the hell was this woman like out in the field? She moved like a predator, but the look on her face was pure sarcasm. “Uhm, your words. That’s what sealed it for me. ‘I don’t want to do this’ is generally considered a rejection.” Somehow she managed to put an unsaid “dumbass” on the end of her sentences. Not all of them. She’d been perfectly sweet most of the night, but she could turn it on when she wanted to. “I didn’t mean that. When I said the words, I watched you change. Why? You’re good at slapping people down. I wouldn’t have said that until today.” “Because I’ve been careful around you,” she admitted. “Why? You think I’m delicate?” Her lips curled up. “I don’t think you’re delicate. I think I’m a lot to take, but I also am starting to believe I was wrong. You like me rough.” “I like you a lot.” More than he could ever tell her.

Posted by Christina R at 6:00 AM No comments:


ONLY YOU Release Day Blitz Assets 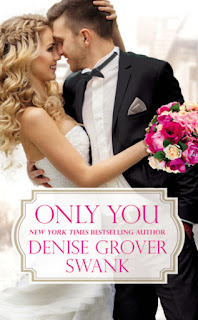 Denise Grover Swank has another hit on her hands. If you've read her other books, then the name Kevin Vandemeer may seem familiar to you. He is Megan's brother and his story is just as hilarious as hers was. Holly was his perfect match and I really enjoyed their story. I give it a solid 5 stars and will be reading this book again.
BOOK INFORMATION 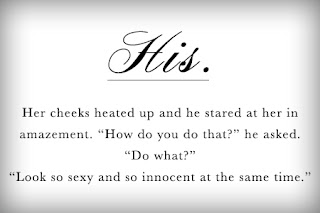 The first book in a spin-off from Denise Grover Swank's New York Times bestselling Wedding Pact series (The Wedding Pact, The Player, The Gambler, The Valentine)

“Warm and funny, the first book in the Bachelor Brotherhood series reads like a great Hollywood rom-com.” –iBooks Best Books of June

Never say never…Romance isn't an option for Holly Greenwood. With her wedding planner career on the line she needs to stay focused, and that means pleasing her demanding boss, not getting distracted by her mind-alteringly hot neighbor…

Ex-Marine Kevin Vandemeer craves normalcy. Instead, he has a broken-down old house in need of a match and some gasoline, a meddling family, and the uncanny ability to attract the world's craziest women. At least that last one he can fix: he and his buddies have made a pact to swear off women, and this includes his sweetly sexy new neighbor.

After one hot night that looks a whole lot like a disaster in the light of day, Kevin and Holly are about to learn that true love doesn't play by the rules… 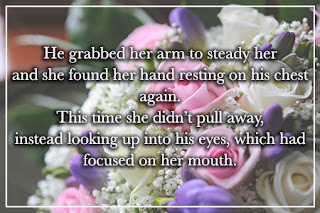 Kevin wasn’t sure why he was surprised Holly was here. She was a wedding planner, and from what he’d seen so far, she was a damn good one.
He’d been on his way out of the room, needing a breather from the noise and the chaos of the reception when he’d seen her at the table. He hadn’t planned on asking her to dance—hell, he hated to dance—but he’d been desperate for a reason to talk to her.
When he sat back down at the table, Tyler wore a smirk. “Crashed and burned, huh? I thought you were going to the bathroom to take a piss.”
“I was. I just happened to run into a friend.”
“Run into a friend, my ass. I thought we’d sworn off women. I’ve held up my end of the bachelor brotherhood. And let me add that I had no idea my balls could turn this blue.”
“She’s a friend,” Kevin said, trying not to sound irritated and feed any more fuel to the fire.
“She’s his neighbor,” Matt said, taking a sip of his beer, and giving Kevin a pointed look. “They’re friends.”
Tyler burst out laughing. “You got friend-zoned?”
“No,” Kevin said slowly, picking up his drink, surprised Matt hadn’t told Tyler about the situation he’d stumbled upon. “I was the one who said I wanted to be friends.”
“Why?” Tyler asked, watching Holly with a little more interest than Kevin liked. “She’s hot. Do you know if she’s seeing anyone?”
“No.” Kevin’s irritation grew.
Tyler stood and adjusted his tie, a smirk lighting up his eyes. “Screw the brotherhood. I think I’ll go over and introduce myself.”
Kevin was up in a flash. “I don’t think so.”
“Why not?” he looked surprised. “She looks like she’d be worth a short break from my hiatus from women.”
Kevin stepped in front of his path, his jaw set. “Because you’re a prick who will use her and toss her aside and she deserves a helluva lot better than that.”
Matt was up in an instant, grabbing Kevin’s arm. “Why don’t we get some air?”
“You like her,” Tyler said, slack jawed.
“Of course he likes her,” Matt said. “For someone so smart, sometimes you’re an idiot.”
“In my defense,” Tyler said. “He said they were friends.”
“Okay,” Matt said slowly. “When was the last time you convinced a woman to be just a friend?”
“Never.”
“I rest my case, counselor.”
Tyler sat back down, and Matt tugged on Kevin’s sleeve to get him to join them.
“I can’t believe you didn’t last even a single week,” Tyler said.
“He didn’t last a single day,” Matt told him. “He slept with her the night after our agreement to remain single.”
Tyler burst out laughing. “For a tough-ass former Marine, I expected you to be the last holdout, man. At least a week or two.” 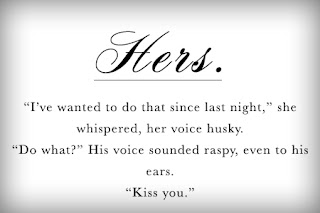 New York Times and USA Today bestselling author Denise Grover Swank was born in Kansas City, Missouri and lived in the area until she was nineteen. Then she became a nomadic gypsy, living in five cities, four states and ten houses over the course of ten years before she moved back to her roots. She speaks English and smattering of Spanish and Chinese, which she learned through an intensive Nick Jr. immersion period. Her hobbies include witty (in her own mind) Facebook comments and dancing in her kitchen with her children. (Quite badly if you believe her offspring.) Hidden talents include the gift of justification and the ability to drink massive amounts of caffeine and still fall asleep within two minutes. Her lack of the sense of smell allows her to perform many unspeakable tasks. She has six children and hasn't lost her sanity. Or so she leads you to believe.